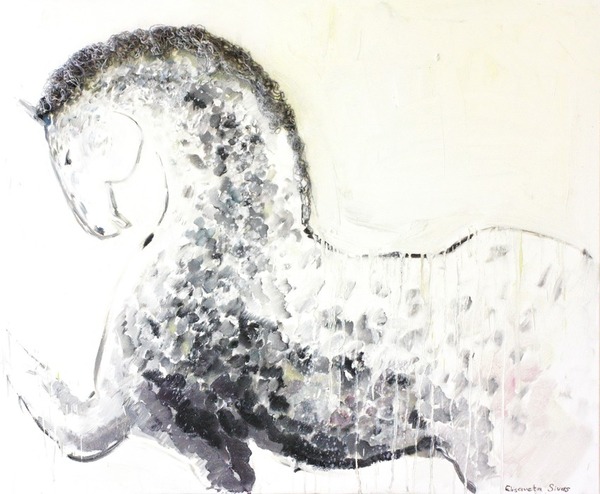 Elisaveta Sivas (b. 1979, Saint-Petersburg, Russia)
Born in St. Petersburg in 1979 a designer of Russian-Estonian origin, Elisaveta Sivas started visiting a ceramic studio at the age of three and later she continued to study painting and sculpture in the Art School. After working for several years as a researcher at the State University of Cyprus, she followed her desire to create clothes and art objects and studied fashion, painting and ceramics. In 2009 she graduated from St. Peteresburg Art Future School of Design, where she studied Fashion and Costume Design. She took lessons and worked her ceramic pieces at Valeria Polsinelli’s studio Graines de Terre in Paris, Aleksej Berensen's studio in St.Petersburg and Vassos Demetriou’s studio in Larnaca. She took special courses in Fashion Design in Felicidad Duce Fashion School in Barcelona and in NABA in Milan. Elisaveta's paintings include fairy tale creatures, horses and birds mostly. As a fashion designer she creates unique handmade silk dress in retro style. Each dress represents more a piece of art, than a fashion garment.
Education: Graduated from the Philological Faculty of St. Petersburg University, 2000. Mastesr degree in Greek Linguistics, 2002. PhD in the Theory of Language, 2007. Graduated from St. Peteresburg Art Future School of Design, 2009. 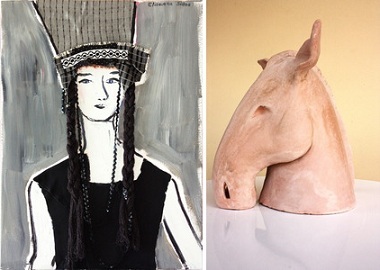 elisaveta-sivas.blogspot.com
Elisaveta Sivas’s artwork is an allegorical interpretation of Human nature, existence, experiences. It is a meaningful story told in the form of symbolic figures and interactions between them, filled with intellectual messages delivered in aesthetical form. The viewer could continue Elisaveta’s story or could create her/his own one, reflect, meditate, contemplate, dream... Elisaveta Sivas graduated from St. Petersburg State University of Russia. She holds a degree in Modern Greek and Byzantine Studies and has a PhD in Theoretical Linguistics. She taught and did research at the University of Cyprus. She studied fashion and theatrical costume at the Art Future School in St. Petersburg. She studied ceramics at Valeria Polsinelli’s workshop in Paris and Vassos Demetriou’s workshop in Larnaca. Elisaveta attended classes of art in the Academy of Art in Palermo. She also followed painting courses and aesthetics of art lessons at the workshop of the artist Christos Avraam in Cyprus. Elisaveta presented her work in group and solo exhibitions. Her works are in private collections in the United States, United Kingdom, Australia, France, Russia, Cyprus and other countries.​